Do fish see us? A good question, not only for beginners.

Do fish see us? This is a good question, not only for beginners… Let’s see what actually happens when on the river bank

I am not far from the river. Fish activity is restless: they’re feeding on caddis dipping their back into the water, laying egg. Rises can be easily seen also from a distance.

My rod is ready. I pull some line out of the tip ring and start some false casts. I approach the water… some 10 meters… pouf… Suddenly rises stop. Have they spotted me? From so far? Impossible! I stop. Rises start again, a little farther.

A few more steps toward the river: a long cast to those rising a few meters from the centre of the stream. Everything turns quiet. Everything stops. I reach the border of the river: rises have started again but some 20 meters farther.

I seldom step into the water to avoid disturbance but this is a limit case, and I reach the centre of the stream, looking well upstream where some fish’ activity is on again. It’s windy and I must force my cast, waving as a flag more than necessary. The rises stop even before the fly hits the water. Unbelievable! I’m still so far… what happened???

The above is a good description of what should NOT be done because fish – strange but true – have a good sight of what happens outside water. Not only in front of them but laterally and above them as well. Let’s talk about.

Fish takes advantage of what is known as the “mirror window”. Let’s suppose a fish is laying one meter below the water surface. Above, it has a “window”, a circle with a diameter of some 2 meters (that is, the double of the depth): the fish can perfectly detect, valuate and intercept – and refuse as well – everything crossing the circle. Last but not least, the fish can also see and identify anything outside the window, as specified in the drawing. 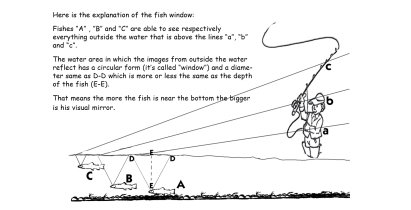 This means that “my” fish were able to see me when I was still some 10 meters away from the river bank and could be disturbed by my movements when I was trying to cast the fly to the river centre.

Last but not least, I have entered the water creating some disturbance on the surface and on the river bottom. Also, when I tried to cast the fly some 20 meters or so away, I have been obliged to fight against the force of the wind and my movements had been rude and out of control: fish spotted me and stopped rising.

This is a typical situation with trout but it is harder and more difficult when dealing with chub (harder to be caught compared to trout).

In case of grayling, we are luckier because they don’t tend to flee away and can normally be fished from a shorter distance but they are not easier than trout: grayling ask for delicate casts, perfect presentation (the fly should always appear to the fish before the tippet) and exact passage through the fish mirror window.

While trout may accept to dart any direction to attack a fly, in case of grayling our cast should be as precise as possible.

Chub have a more aggressive approach: they rarely stand in one given rising spot and move here and there along the river.

This makes fish spotting rather difficult and once you see a rise, you are never sure the fish is still there. They normally gather in groups and feeding competition inside the group is very strong.

Once the group is identified, casting precision is not always necessary: they will attack the fly as quickly as possible given that you have not been detected while approaching.

This leads us to the following conclusion: The least the disturbance on and in the water, the better. Long(er) casts are most of the time unnecessary if you can approach the fish in a decent way, grabbing the opportunity offered by branches, trees, logs and much more.